Here is a bit of history of Carnevale in which many participated in this past week! In the year 1162 in Venice the Carnevale of Venice was born. Originating from a victory of the "Repubblica della Aquileia" which was Venice's original home. So, in defeating the Patriarch of Aquileia that year the victory was honored with a festival of dancing and reunions celebrated in San Mark's Square!


Masks being a tradition of celebration of many sizes and names depending on coverage of the face are worn at Carnevale. The mask would hide the wearer's identity and social status permitting the wearer to mingle among high society and his peers with no recognition. These encounters could be used as personal, criminal or romantic intentions. Romantic intentions such as the masked ball in Shakespeare's Romeo and Juliet!


This past weekend ITALIA UNITA of East Boston showed us a taste of Carnevale! Full screening of actual festival parade in Venice during Carnevale was shown! Dancing and traditional music was enjoyed by all. Real and colorful paper mâché items were on display! The giant cannoli was my fav! Coffee and drinks were served with Pignolata (a Sicilian specialty) and Chiacchiere literally translated into "chatter," "chit chat" or "gossip" however is a strip of sweet pastry dough fried and coated with sugar! It was sheer delight as we chatted with all our friends as we enter the solemn Lenten season!


Thanks Lisa for all your work!

Posted by David Trumbull at 10:17 AM No comments: 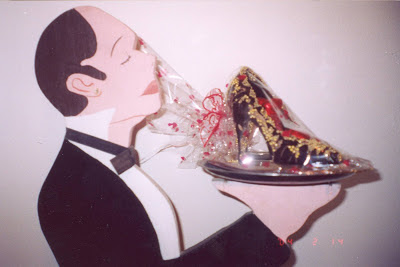 Posted by David Trumbull at 10:38 AM No comments:

Last year was a remarkable experience just attending the Miss Boston Pageant! I can just imagine how exciting an opportunity like this can be for some of our locally planted girls. Just the idea that your personal opinion and appearance as a contestant makes history around our treasured Commonwealth is reason to go for the title Miss Boston 2012. There will also be over $5000 in scholarships and prizes. You will see girls from Harvard to local work places striving to be the best they can be so they can represent our Commonwealth in fashion! Home to the Miss Boston 2012 Pageant is The Omni Parker House. The event starts at 5:00 PM on Sunday, February 19th. You may purchase tix online at www.MissBoston.org/. There will be 5 stages of competition, talent, showcase, interview, physical fitness, eveningwear and onstage interview. The girls are all wonderful to watch!


The history of the MB Pageant has provided a stage for young women to achieve their personal, professional and educational goals. Girls from 17-24 years old will compete for the MB title. The Miss Boston pageant is the official preliminary for the Miss America Pageant and Miss Massachusetts program. The Miss America organization is one of the nation's lead achievement programs and world's largest provider of scholarship assistance providing over $45 million for young women! Sara Carlisle the 2011 Miss Boston winner will share her fabulous experience and hand over the crown! Thank you Sara for representing the Hub with such grace, talent and style!


Valentine quote for the week: "Love is like a beautiful song, echoes on in the heart when the last note is silent." Happy Valentine's Day everyone -- XX.

Posted by David Trumbull at 10:22 AM No comments: