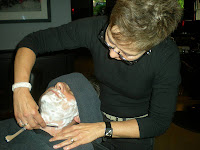 Men’s grooming has hit Boston like a wave. In the past year, several men’s grooming centers have opened their doors, as long-established spas and salons have begun setting aside certain nights and treatments for men only.

“Guys are really into this,” said Kelly Tarlow, manager of High Street Men’s Grooming Center on Newbury Street in Boston.

READ THE STORY IN THE BOSTON HERALD
Posted by Anonymous at 9:24 PM